To Fanfic or Not to Fanfic -- That Is the Question 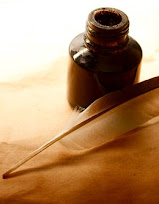 I love fanfiction. Love it, y' hear? Love it. Especially when it gets good and steamy. I love steamy fanfic. When you can read all about your current infatuation "in action". Especially when you can imagine that it's you that s/he is getting it on with.

But writing it seems to be a different matter among many authors. I know of quite a few that refuse to release their characters to fanfic. Even going so far as to threaten legal action if they catch it happening. And I know of many other authors that don't mind as long as you stick to their canon. But I think they forget that there were some very famous authors who wrote and still write fanfiction. James Joyce wrote Ulysses, a fan fiction piece taken from the stories in The Illiad. Neil Gaiman wrote his Norse Mythology, as an unapologetic retelling of the Norse myths of Thor, Odin, and Loki. And let's not forget The Stan, aka Stan Lee who created his own fanfic in the form of his comics about the Norse Gods.

Do a Google search on famous authors who wrote fan fiction. You'll get a long list.

I love reading fanfiction. But I also love writing it. Go on An Archive of Their Own and look for Lady Thomas Sharpe. I love writing Loki fanfiction -- based on the mythology and the Marvel character -- as well as Tom Hiddleston fan fic. And I write some serious NSFW (Not Safe For Work) stuff, too.

If you ask me, I don't discourage it. No, you're not writing your own, but.... It will give you great practice in plotting, character development, and writing in the original landscape will teach you how to make your own. It takes work to write fanfic. To be faithful to the characters and the author's intent. Or the movie's intent. Once you learn the tricks of the fanfic trade, you'll be able to go in and make your own stories, your own characters. Once you learn how the originals plotted and then, you'll know what to do with your own worlds and genres.

Always a good thing. Find someone or some world that you feel passionate about and get to writing. Learn by doing. And then come back and give me a link in the comments. I promise, I'll be glad to read. I can't wait.

The RTP for the Game of Thrones slot is 95.03% for the 15 payline version and barely greater at 95.07% for the 243 methods to win. The logo is the wild symbol and you will get get} in on all the motion on cell and desktop. Players who've a registered 1xbet account will receive email alerts from Casino JackpotCity that may contain bonus codes for mid-week bonus presents.