Welcome to Kentucky -- we enjoy our horses and a good glass of bourbon. But not when it's the instrument of someone's death. That puts a crimp on the enjoyment. She said, tongue in cheek and with a sense of sardonic wit. 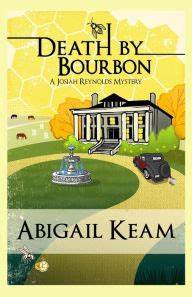 At least I hope that passed for "sardonic wit".

But Death by Bourbon is the fourth book in the A Josiah Reynolds Mystery series by author Abigail Keam. Another great read by the author and another diamond in the series. I'm serious--I can't put these down. Once I start reading, I have to keep on reading until I have read the last word of the story.

The extremely handsome Addison DeWitt has a glass of bourbon and immediately lapses into seizures, ultimately dying. But was it an accident or was it murder? Addison's "girlfriend" is sure it's murder. Josiah thinks so too. But proving it is harder than she imagined it could be. Because no one believes her. Added to that, her daughter Asa has left the country. Her friend Franklin has left for an extended cruise. And her lover Jake is back but distant to her.

Once again, red herrings a-plenty. Plot twists abound. One of the great things I like about Keam's cozy mysteries is that they play out from the heroine's point of view and she's not always right. But she gets there. So we have a flawed character who is human but not an idiot. As I've said before, even in the depths of depression, Josiah Reynolds is a fighter and a feisty lady. A strong woman.

Her family and friends are flawed, but so real. So is her daughter Asa. We get to see a lot of the woman Asa is and learn more about her as a person. Asa is complicated, a little on the scary side, but very protective of her people, most especially, her mother. I wouldn't mind seeing her spun off into her own series, to be honest.

Death by Bourbon is one of those books that stays with you. And makes you hunger for the next. Made me want to go on to book 5. Of course, reading an excerpt of the next book is a damn fine inducement too. And I intend to.