Ever been so deep into a series that it's all you think about it? I have.  Books, television, movies. My latest obsession seems to be Abigail Keam's "The Josiah Reynolds Mysteries". I can't put them down and until I read the last word on the last book, I won't be able to read anything else. After devouring the first two books in the series, I put down the Bridgerton novel I'd intended to read and moved on to book three, Death By Bridle. 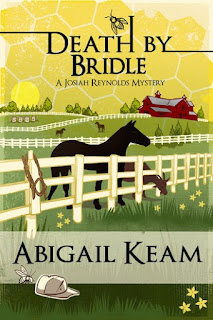 I certainly was not disappointed. If anything, I'm even more obsessed.

Josiah is still recovering from the injuries that she sustained in book one, Death By Honeybee and had begun healing from in book two, Death By Drowning. But now she has another mystery fall into her lap -- the death of an acquaintance, possibly witnessed by Lincoln Todd, the teen son of her lawyer, Shaneika. But that's just the tip of Josiah's personal iceberg. More evidence has popped up in the murder/death of Richard Pigeon (from Honeybee). The detective that almost killed her in book one is back and might just get released on technicalities. And the man she's fallen in love with has disappeared to parts unknown. It's enough to destroy her entire world. Again.

Abigail Keam adds so much of the history of the state that it's like reading a gossip column of the who's who of Kentucky. The salacious stuff, the juicy tidbits of someone's past that probably should have stayed buried. But can't be, because those details will help her solve the crime. Plot twists galore that kept me on the edge of my seat. I love those books that I can't read fast enough because I have to know what's going to happen next, but I can't read slow enough so that I can savor every little detail that comes.  This is one of those books. You'll hear the term "pacing" a lot. The pace of this one is perfect.  Again. As usual. This lady writes as if she was there and makes me feel like I'm there too.

No wimpy wussy characters in these stories. Josiah is definitely a handful but even in her depths of depression and pain, the real Josiah bubbles to the surface and stands up to the adversity. We see the vulnerable but we also see the stubborn. An amazing woman. The circle of friends that she's gathered are just as diverse as they can be, all of them into other things, different skill sets and talents. And they complement our leading lady quite nicely.

I'll get to Bridgerton eventually. But for right now, I have to ride this horse as far as it goes, as fast as it can run.

And I'm giving Death By Bridle another 5 out of 5 stars -- great plot, great pacing, great characters. If you're not reading them and you're a fan of historical cozies, cozies in general, and just flat out wonderful writing, then you're missing out on something special.

If you win the third hand you'll be able to|you possibly can} play the final hand with all wins multiplied by 8. Keeping the held card constant, the machine will then carry out a number of} offers to replace the discarded cards. For example in a 10-hand game, the machine will deal 빙고 10 occasions to replace the discarded cards. At wizardofodds.com, Michael Shackelford has calculated payback percentages for games on the Super Stacks format. If you can find 9-6 Double Double Bonus Poker, the common return without the function is 98.98 percent, but with Super Stacks it grows to 99.79 percent. Super Stacks is available in Triple Play, Five Play and Ten Play versions.