Twilight pretty much ruined vampire stores for me for a long time. Not that Stephenie Meyer's books are bad, far from it. But I was working as a copyeditor at the time and the sudden glut of vampire love stories put me in a coma. They were bad. They had no clue about the real story and draw of the Twilight books and were such a pale imitation, I begged the publishers to stop sending me those books. I swore I was never going to read another vampire book again.

And then came Dracula Theory by Jack Wallen. And I quickly changed my mind. 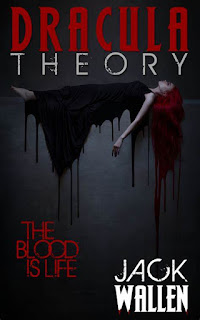 Reading Bram Stoker's Dracula is certainly not a prerequisite, but it helps. Wallen takes that story and gives it a fascinating spin, turning the plot on its ear. Motivations are reexamined and reworked. Jonathan Harker has just proposed to Mina Murray; madly in love, these two. And as is the custom of the time, Harker must have the approval and blessing of Mina's father, the Baron Murray. Who immediately shoots that idea down - how can a mere, lowly lawyer ever be worthy of his daughter. But he gives Harker a task -- if the task is completed successfully, the Baron give his blessing. If not, the happy couple will never see each other again. Jonathan is gone the next morning. Arriving in Transylvania, he is to take a sealed letter to a Count Dracula and then return to England with the Count in tow. However, Dracula gives Harker a resounding 'no' and boots him out the door to return to England, empty handed. Being a rather intelligent young man, Harker feels that since this involves his life and marriage plans, he has a right to know what's going on. So he opens the letter.

And there begins the first of many plot twists that take you, the reader, into some very dark places. Needless to say, Jonathan does return to Transylvania with a Mr. Renfield and Dr van Helsing along for the business at hand. But you'll get no spoilers from me. You'll just have to read this phenomenal story. And trust me, you will not want to put it down or sleep in the dark.

I read the original Stoker novel, so this book is following along in some pretty damn big shoes. But Wallen fills them well. His prose has captured the feel and visuals of Victorian England so very well, that I was there. I recognized every moment, every place, and every word spoken. The pacing of the story is spot on, never glossing over or dragging out the events. Everything happens as it should and when it should, raising that sense of danger in the written word. The characters are also true to their time, they remain true to themselves. And I love how Mr. Wallen has added his own spin while being true to the source novel as well. Something that's very hard to do -- but he's done a great job in "re-inventing the wheel".