Two more days and the ebook format of The Savior is up for release. I've done everything I can do to get it ready. The cover is gorgeous, the prose is as problem free as human hands can make it. Everything is formatted and ready to publish.

And so, Part Three of The Great Experiment begins. To celebrate the release of the Savior on Thursday, I'm putting my book Salt of the Earth up as a free read for three days -- 2/27 - 3/01. Yup, that's right, a free read. Wednesday through Friday of this week, go to Amazon's webpage for the book and grab it for free. And don't worry, if you don't have a Kindle, you can get the app to read the book on any tablet, smartphone, or computer.

And I'll have the link posted all over on Thursday for The Savior. But for now, one last excerpt before the release. Enjoy.

"Aye," Liam confirmed, "Breach, just as I feared. Tobias, fetch me a pail of water and those rags from the bin by the door. Gwydion, you'll need to help me. Hold her back legs for me." 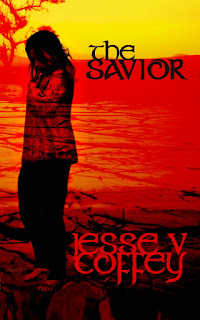 Toby grabbed the pail, and dashed out to the pond to fill it. When he came back, he snatched a handful of rags from the bin. By the time he had arrived with what he had been sent for, he saw Gwydion and Liam pulling the baby from the mother's body. They laid it gently down on the ground next to the mare; she was so exhausted, she could no longer move. The baby was glistening with the wetness of the blood and amniotic fluid. But something was still wrong.

Gwydion reached out a hand, not looking up. "Give me the rags, Tobias."

Toby handed them to him and brought in the pail of water. Liam and Gwydion took the rags and began to wipe the goo from the baby's body. Liam paid particular attention to the fragile ribs of the newborn and kept massaging in that area. But, the baby wasn't moving. Toby also saw, the chest wasn't moving – the baby wasn't breathing.

"Oh, Da, we're too late. Oh, damn!" Gwydion's frustration was evident in his face, and he threw the rag down on the ground and sat back on a mound of hay.

Liam refused to give up, and continued to massage the body. "Come, wee one. You can do it. Breathe for me, now. Come on. Breathe...breathe!"

It became evident that the foal had been stillborn and nothing anyone could do would change that. Liam finally gave up his attempts and ducked his head, running his bloody hands through his hair. The mood quickly turned to despair and Toby leaned against the threshold.

Gwydion reached out to his father, laying his hand on the older man's shoulders. "Da, it was just not meant to be. You did what you could."

Liam nodded weakly, and turned to the bucket to begin washing his hands and arms from where he'd been inside the mare's body. "Aye, I know. I don't like to see a new life taken so brutally." He swore softly and sighed deep. "I wish I'd paid more attention to the poor mare."

Gwydion stood up and helped his father up. Liam brought the bucket out and Gwydion took up the rags, following him. They stopped outside the stall and Liam set the bucket on a hay bale. The two men were somber while they cleaned off the goo and muck from the birthing. Toby turned to watch them as they continued to discuss the hardship that losing this foal was going to cause. The foal had been promised to Toby as another compensation for his work in the fields with Liam. Horses were a rare commodity in the village and a death was a loss to them all.

Toby was the only one who heard the snort come from the stall. Again, his attention was brought back to the drama unfolding. He saw that Yeshua had moved from the mare's head to stand next to the foal. The newborn horse lifted its head and, in a disorganized ballet of knees and hooves, it wobbled to its feet in one jerk. It snorted once and quivered, shaking itself and its mane. Yeshua made the same gesture to the foal that he had to the mother, caressing its cheek with his hand, cooing softly.

Toby stood, frozen to the spot with his mouth hanging open and his chin practically touching his chest. He couldn't articulate what he was seeing; there were no words. He put out his hand, reaching out until he made contact with a shoulder and shook it hard. The shoulder belonged to Liam, who wheeled around quickly.

"Tobias, what do you – sweet Brighid, what have we here?"